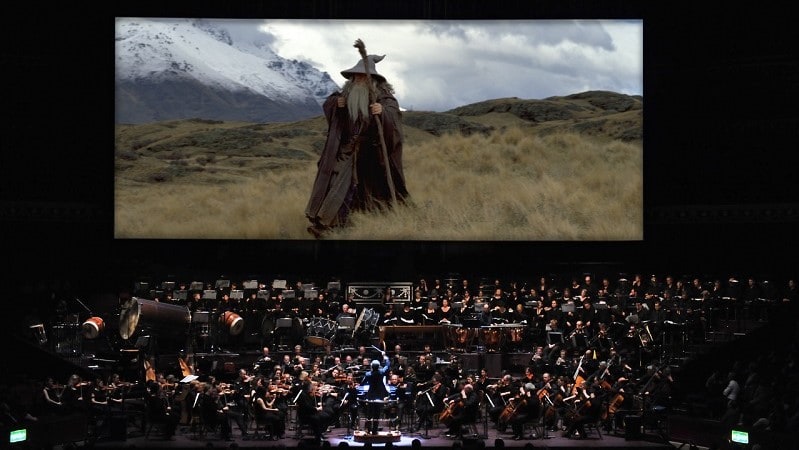 Galatia Films is partnering with Warner Bros. in a promotional segment and YouTube channel premier promoting “The Hobbit” films titled “Soundscapes of Middle-earth”. The show will feature Galatia Films’ very own Rebecca Platt who has now gone on to work for Disney. The series will highlight the Howard Shore’s Orchestral Tour that is a top production this season. As the official companion to the highly anticipated “Lord of the Rings in Concert – The Fellowship of the Ring”, Galatia Films is delighted to once more be a part of key promotion for a phenomenal work of art. It was kicked off with a 9 city west coast tour. Three year national celebration of “The Lord of the Rings” trilogy upon the 10 anniversary of the film trilogy.

Howard Leslie Shore OC (born October 18, 1946) is a Canadian composer who is notable for his sweeping epic film scores. He has composed the scores for over 80 films, most notably the scores for “The Lord of the Rings” and “The Hobbit” film trilogies. He won three Academy Awards for his work on the first trilogy, with one being for the original song “Into the West”, an award he shared with Eurythmics lead vocalist Annie Lennox and writer/producer Fran Walsh, who wrote the lyrics.

Composer Howard Shore brings J.R.R. Tolkien’s literary imagination to vivid life with his Academy®- and Grammy® Award-winning score to ‘The Lord of the Rings: The Fellowship of the Ring’. Shore’s music expresses Peter Jackson’s film as an immense symphonic work — a uniquely developed vision drawn from centuries of stylistic tendencies.

The music of “The Lord of the Rings” is counted among film music’s most complex and comprehensive works. This unique performance sets the score to the film, but allows the music to bear the narrative weight, creating a wholly new and dramatic live concert experience.

Shore’s score not only captures Fellowship’s sweeping emotion, thrilling vistas and grand journeys, but also echoes the very construction of Tolkien’s Middle-earth. styles, instruments and performers collected from around the world provide each of Tolkien’s cultures with a unique musical imprint. The rural and simple hobbits are rooted in a dulcet weave of Celtic tones. The mystical Elves merit ethereal Eastern colors. The Dwarves, Tolkien’s abrasive stonecutters, receive columns of parallel harmonies and a rough, guttural male chorus.

The music’s vast scope calls for symphony orchestra, mixed chorus, boys chorus and instrumental and vocal soloists singing in the Tolkien-crafted languages; Quenya, Sindarin, Khuzdûl, Adûnaic, Black Speech, as well as English. Original folk songs stand alongside diatonic hymns, knots of polyphony, complex tone clusters and seething, dissonant aleatoric passages. It is purposeful, knowing writing, as contained in execution as it is far-reaching in influence; for within this broad framework resides a remarkably concise musical vision.