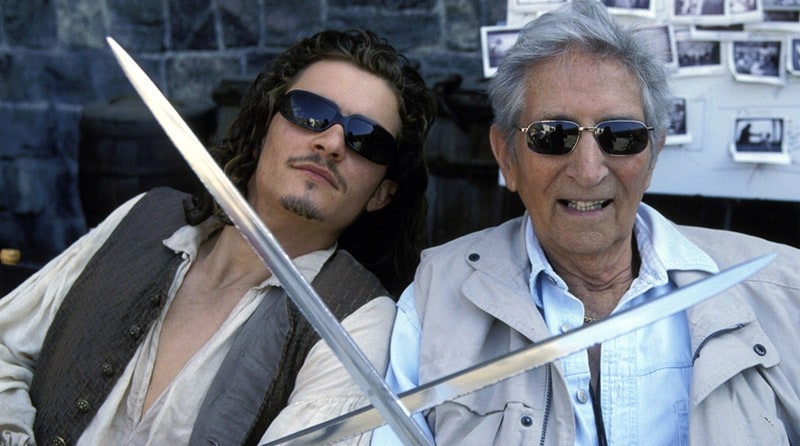 Sometime after his contribution to “The Lord of the Rings” trilogy, Bob Anderson had worked as the Sword Master on the “Pirates of the Caribbean” movies. To maximize authenticity in the film, all of the actors playing pirates and some playing British naval officers spent weeks training with stunt coordinator George Marshall Ruge and sword master Bob Anderson, who Ruge originally met while working on “The Mask of Zorro”. “Bob is a legendary sword master,” said Ruge. “When he arrived in Los Angeles, the fight choreography was basically done, but I wanted the actors to have a chance to meet him and work with him just to give them that extra ten percent that only Bob can give because he’s been doing it for 50 years. No one else has that expertise or spark. It was well worthwhile. Just the idea that the actors knew Bob’s history and the fact that he’s the best in the business, a legendary sword master, made them excited about training.”

Orlando Bloom reunited with Bob Anderson on set of The Curse of the Black Pearl. As luck would have it, Orlando Bloom (Will Turner) had already spent time with both Ruge and Anderson on “Lord of the Rings”. “It was great to work with Bob again,” said Bloom of Anderson’s involvement in The Curse of the Black Pearl. “I’d done some fencing when I was in drama school in London, but working with someone as proficient as Bob is quite a different matter. I mean, this is the guy who trained Errol Flynn!” Actor Geoffrey Rush (Barbossa) also complimented on Anderson’s understanding of “acting with the sword”.

During Anderson’s time with the actors, Ruge made certain he went over the fundamentals and imparted as much of his technical skill as possible. Learning to be a pirate was not only about imitating the swagger and demeanor of a brigand, it was a serious study in brandishing a boarding cutlass or rapier. “Pirates films are my favorite,” said Anderson. “But modern fencing, like the competitions you see in the Olympic Games, is highly technical and very precise in its actions, unlike screen fighting which is choreographed in such a way that the combatants make the action as large as they can for the camera. But whether it’s ancient or modern swordplay, you start by learning to hold the sword properly and to manipulate it for attack and defense. And even though we use aluminum replicas, I’m religious about safety because working with any sword is dangerous.”

“Swordplay is a conversation,” he explained. “The opponents talk to each other with their blades. The style of fighting varies with each character. If I can make the sword work talk about what’s happening in the script in the same way the dialogue conveys the story, then I feel I’ve succeeded.”

Anderson was regarded as the premier choreographer of Hollywood sword-fighting, and during his career he coached many actors in swordsmanship, including Errol Flynn, Sean Connery, Antonio Banderas and Johnny Depp. He also appeared as a stunt double for Darth Vader’s lightsaber battles in Star Wars Episode V: The Empire Strikes Back and Star Wars Episode VI: Return of the Jedi.