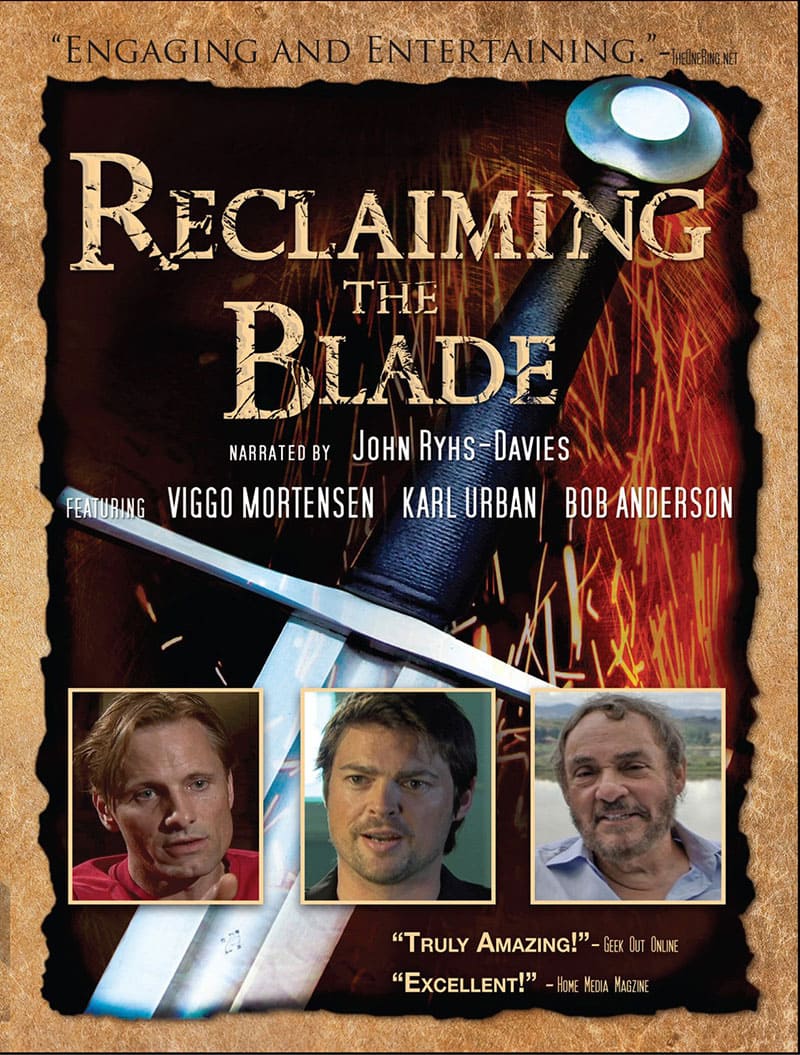 Galatia Films has garnered Lord of the Rings’ stars Viggo Mortensen, John Rhys Davies and Karl Urban in addition to Rings’ designer John Howe and Weta Workshop director Sir Richard Taylor. There is certainly nothing that comes close to what Reclaiming the Blade, the new documentary from Galatia Films, has attempted. The need to place the modern popular culture’s fascination with the sword in context with what has been going on within the historical fencing community is a challenging undertaking. Reclaiming the Blade brings a needed perspective on the Medieval & Renaissance sword.

This is an unprecedented effort, entertaining as well as informative. There are superb visuals and excellent graphics throughout. High production values and professional work make this a first rate documentary. While aimed at a general audience it is entertaining to specialists as well. The film pays homage to the emergence of historical fencing studies and the revival of interest in real swords and real swordsmanship — in contrast to the usual stunt fencing, sport game, and escapist role-play.

Fortunately, the variety of individuals featured from the historical fencing community was done without it coming across as patronizing toward them. They are portrayed with sincerity and confidence. That sympathetic touch has to be commended, as a documentary can easily be too familiar with its subject or else feel too distant. A large amount of the narration from the middle and end of the film will also sound familiar from the message expressed by the ARMA. The film correctly identified our craft as something distinct and new. The creators also worked in the message that theatrical swordplay should do it better so that everyone benefits.

The central message of the film, however, doesn’t fully portray the fact that the revival of historical European fencing requires acknowledging the need for “reclaiming the blade” from the usual suspects. Instead, the message is more a desire to celebrate everything involved in the modern incarnation of the sword as all being different equal voices in the same chorus. It works hard to pay homage to this even as it seems to regret the very message it is trying to celebrate: that the emergence of historical fencing studies and the revival of interest in real swords and real swordsmanship now is a direct result of the fact that certain parties said “enough!” to the usual stunt fencing, sport game, and escapist role-play. That message is perhaps made too softly here to be noticed in the way it could have. Regardless of this being the first film to cover our craft of historical fencing in an accurate manner, it is a worthwhile effort at filmmaking. The message was expressed that the modern sport of fencing, the fencing of notorious groups like the SCA, as well as the swordplay of popular entertainment are not representations of the historical European martial art of the sword — something which is at long last being reclaimed elsewhere. While the movie is often an inconsistent mix, it’s a satisfying enough presentation for any student of historical European sword arts. Though a bit inconsistent at times, there is no denying it is an unprecedented look at the Sword in Western culture today. Reclaiming the Blade is certainly something every student of this craft should have in their own DVD collection. While it misses some opportunities in what it does, expect this film to have a lasting impact.