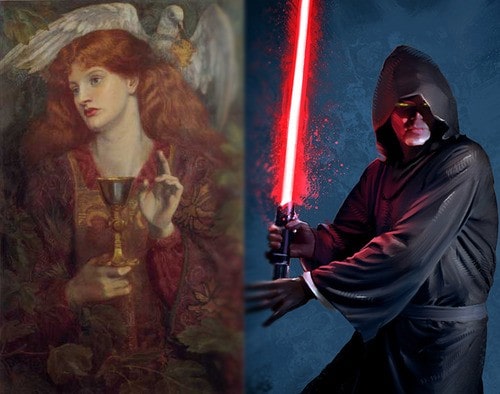 From our Executive Director Daniel McNicoll

While it is true that my next writing installment was to be on Glastonbury and Tolkien, I am now finding fresh inspiration on another related topic. I’m still researching on the Tolkien side, and with a new posthumous poem from Tolkien being published next month, I thought it would be a good time to take a slight detour that may give us a new exciting view of Avalon. I’ve not written in a while but these are exciting times for Glastonbury: Isle of Light. If you missed my previous story on Glastonbury and Narnia you may find it here.

As many are aware a new J.R.R. Tolkien epic poem is due to be published in May titled The Fall of Arthur. I would like to briefly discuss King Arthur and his connection to the Star Wars Legacy and also how both fit into the Glastonbury legends. It’s an interconnected, intergalactic story, so let’s get started! Recently I found myself with some idle time at the local library and began browsing through the fiction section to see what people were reading. Not surprisingly for me, I eventually left with two non-fiction books, yet while glancing through the fiction sections, I made a discovery, Star Wars novels abounded.

Since the first Star Wars film in 1977, there have been many novels written, expanding George Lucas’ sci-fi universe slowly and steadily. There have been more than a few breakout Star Wars novelists, and while I’m not read up on such books, it became clear to me that both the unofficial and official cannon of Star Wars is large. This fact reveals why Disney would pay so much for the name, world and future of its galaxy. It’s amazing how this single vision of a film, from a relatively unknown filmmaker, could extend so far beyond it’s vanguard beginnings.

Lucas, from the earliest drafts of what would become the epic, showed almost an homage to traditional storytelling with its hero and dark villain, its underpinnings of honor, integrity and loyalty. George Lucas was going back to the beginning of storytelling at a time when everyone else was desperate to explore the antihero… and it worked. It connected with people much like Greek Mythology connected with those who long ago gazed into the stars and dreamed of other worlds. So many great writers begin by studying the classics and some of the most influential stories are the legends that surround King Arthur.

The King Arthur tradition and its relationship to Star Wars is an interesting one. The code of ethics that the young Jedi Knights are bound to, are similar to the noble code that the Knights of the Round Table held. They also share a common story structure as well, not only in the quest cycle but also in the broader terms of the overall story, as we shall see as we take a closer look at the epic story-lines of two Star Wars trilogies and how all circles back to Glastonbury.

In viewing the structure of the Star Wars films we notice that Episodes I, II and III were preceded by an earlier trilogy. Similarly, with the King Arthur epic we discover that there is a back-story to the events that unfold, events that are key to unlocking the significance of the Avalon legacy. The story of the wise elder and the young boy is found in Qui Gon Jinn and Anakin Skywalker, just as the legends of Joseph of Arimathea and the boy Jesus begin the Arthurian tradition. By the end of the 80’s practically every kid in the world was familiar with the original Star Wars trilogy, its epic storyline and the quest that Anakin’s son Luke embarked on to discover the truth of this destiny and to destroy an Empire that aimed to ruthlessly control the Galaxy. It was the end of the story before the beginning and similarly this is how we see it played out within the Arthurian legends as well. At the heart of it, Glastonbury is an origins tale.

The modes and traditions of classic storytelling are found in Avalon, the hero on his epic quest. What’s fascinating about King Arthur and Glastonbury is that historical events are interwoven into a tradition and folklore that has borne a massive legacy. The original story of Joseph of Arimathea at Glastonbury is episode I, II and III to an Arthurian episode IV, V and VI, the original trilogy of mythology that we are very familiar with. After the first Star War’s trillogy, just as a culture was well versed in the heroic tale of Luke Skywalker and his companions, Han Solo, Princess Leia and Yoda, so too today many are familiar with the story of King Arthur, Lancelot, Guinevere and Merlin. This includes the Knights of the Round Table and their quest to find the Holy Grail. It is often asked of larger than life legends, what are the origins, the inspiration for such traditions, and what are the seeds of this epic romance? I believe they are found in Somerset, in Glastonbury.

Glastonbury is the beginning of Arthurian Legend. Glastonbury is after all Avalon, the claimed resting place of King Arthur. A sign post at the Abbey today reads: “Site of King Arthur’s tomb. In the year 1191 the bodies of King Arthur and his Queen were said to have been found on the south side of the Lady Chapel. On 19th April 1278 their remains were removed in the presence of King Edward I and Queen Eleanor to a black marble tomb on this site. The tomb survived until the dissolution of the Abbey in 1539.”

Indeed the Glastonbury Abbey was essentially destroyed in 1541 and the remains of King Arthur have been hidden or are lost. When the Domesday Book was commissioned, Glastonbury Abbey was the richest monastery in the country. But in time the largest and most powerful abbey in all of England was turned into a quarry, the huge walls representing great wealth and tradition were destroyed.

To be fair some good things came from this period, the birth of some of the greatest universities and educational institutions the world has ever known, but sadly the architecture and monastic life of Glastonbury were destroyed and buried, according to legend, somewhere on the isle of Avalon was the Holy Grail. In fact many Kings are buried at Glastonbury. If George Lucas had not followed the Norse tradition of cremation for a Jedi, perhaps Qui Gon Gin’s body would have rested in a place like Avalon. History reveals that Glastonbury is one of the most sacred ruins on the planet.

So why have these legends sprung back to life in our imagination and where did it all really start? If you desire a quest to seek the Holy Grail you must go back to where it was both first and last seen. Glastonbury, according to tradition and legend, is where Joseph of Arimathea first brought to the Isle of glass the sacred vessel and no one has been written about more in the medieval legends than Joseph. His legacy whatever it was, looms large in literature, an epic character that emerges from the medieval texts leaving an indelible mark on both widely the culture and more specifically storytelling. Thus we find ourselves searching through the roots of a strange hawthorn tree, the Glastonbury thorn, the speculated descendant from Joseph’s staff that bloomed on Wearyall Hill.

Tolkien’s book deals with the Fall of Arthur, while our story at Glastonbury contemplates the birth of Arthur and the birth of Arthurian legend. It’s the genesis story to one of the greatest myths of all time. These stories surround England and hint to a legacy we barely know. Should we embark on this quest to learn more? I believe we should, because not only is the abbey a beautiful thing to behold even in its ruined state, its “walls” are worth rebuilding and there is treasure to be found when we go back to the beginning.