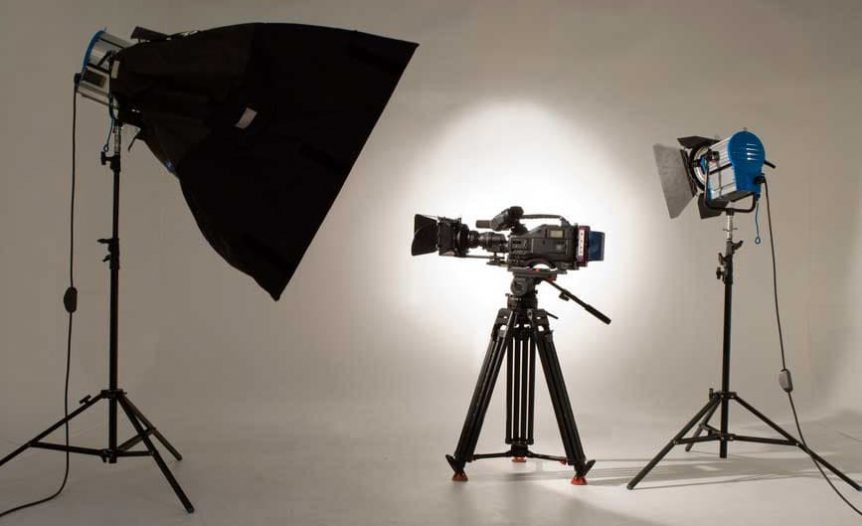 Once the lights are set up we place John Clements in the hot seat not that being there gives him a moments concern. Clements, the president of the Association of Renaissance Martial Arts, ARMA for short, immediately relaxes and his obviously very comfort with his subject. His knowledge and passion for the topic is vast and it shows as we record more than two hours worth of interview footage, most of which is pristine first takes!

Following the interview we move locations and join John in his studio which is packed full of swords of every size, shape, and variety. He walks us through some of his collection and elaborates on the differences between the styles and uses of each weapon. Then, the moment we have all been waiting for, a demonstration of what we have been hearing about and seeing in books during the few hours prior.

As we wrap our first full day of shooting John for Reclaiming the Blade, we are amazed at John’s stamina and energy. This is obviously a testament to both his passion for Renaissance Martial Arts and the robust energy and physical condition.

Some more about John:

John Clements is a leading authority on historical fencing and one of the world’s foremost practitioner-instructors of Medieval and Renaissance fighting methods. As a long-time Western martial artist who has been studying historical fencing since 1980, John is the most prolific writer on historical fencing active today. He has practiced swordsmanship and rapier fighting for more than eighteen years, researched swords and arms in 10 countries and taught classes and seminars on the subject in 10 countries. From 1997 to 2004 he taught public classes and private lessons in Houston, Texas.

John lectures and writes on historical European martial arts and has authored numerous articles on swords and weapon fighting for numerous magazines including: Military History, Renaissance Magazine, Tactical Knives, Karate International, Histoire’ Medievale, Le art de la Guerre, Master at Arms, The Sword, Hammerterz Forum, Hop-Lite, Sword Forum International, and Rapio Journal, and Dragon magazine. John was also a contributor on arms and combat to anthology, Hundred Years War: A Wider Focus (Brill, 2005), as well as a major contributor on historical fencing as well as member of the editorial board to the new Martial Arts of the World encyclopedia from ABC-CLIO Press (October 2001). His writings on swordsmanship have appeared in six other recent historical fencing books.

John has presented historcial fencing seminars and workshops in cities across the USA and Europe, including, New York, San Francisco, Chicago, Houston, Dallas, Orlando, Atlanta, Los Alamos, Princeton, and New Orleans, as well as Calgary, Krakow, Stockholm, Munich, Athens, Budapest, Mexico and Israel. He has also presented demonstrations of Medieval and Renaissance martial arts at the Royal Armouries in Leeds, and the Wallace Collection Museum in London, as well as exhibited at Oxford University, and the National Arms Museum in Hungary.

John has been featured twice on The History Channel, instructed cadets and officers in historical fencing at West Point, and was a keynote presenter at the Sword 2000 event of the New England Bladesmiths Guild, the Schola St. George Medieval Swordsmanship Symposium 2001 in San Francisco. In 1982 he founded the Medieval Battling Club, and in 1999 was the creator and a founding member of the original Swordplay Symposium International. He also presented at the 2001 Texas Medievalists Association annual conference in San Antonio, the 2003 conference at the Univeristy of St. Thomas, and the 13th Biennial New College of South Florida conference on Medieval-Renaissance Studies 2002. He has lectured for the History, Anthropology, and Military Science departments at both Texas A&M and Texas A&M International Universities. He has presented on Medieval and Renaissance combatives to classes at Brigham Young Univeristy, Rice University, and Furman Universities.

John also lectured on historical combat at the Origins gaming convention ’02 and has consults on historical combat for the game industry. Clements is also a patron member of the Oakeshott Institute, has consulted for the US Army’s unarmed combative systems program, and has taught historical European martial arts to underprivileged kids at a college-prepatory academy in Houston. Previously, in 1993 John taught two semesters on swordsmanship at Western Nevada Community College, and in the state of Texas is a Court certified Expert Witness in the area of bladed combat.

John has personally consulted with leading experts and scholars in Europe, practiced with the Fight Interpreters at the Royal Armories, and privately toured several famous arms museums and sword collections. He is the author of the books Medieval Swordsmanship: Illustrated Methods & Techniques (Paladin Press, Nov. 98) and Renaissance Swordsmanship: The Illustrated Use of Rapiers and Cut-and-Thrust Swords (Paladin Press, March ’97).

John currently trains in long-sword, sword & shield, spear, sword & buckler, sword & dagger, and rapier & dagger, and is an ardent promoter of contact-weapon sparring and test-cutting with sharp replicas. In the past 5 years, John has had the opportunity to practice with actual historical swords and has handled more than 200 antique European blades from the 12th to 17th centuries in private collections, auction houses, and museum storerooms across five countries. John is a member of the British Arms & Armor Society and helped pioneer the realistic use of historical wooden training swords (wasters) and a true martial arts approach within the modern study of period fencing texts. In September 1994 John took first place in the Advance Weapon-Sparring competition of the US National’s Kung Fu tournament, in Orlando, Florida. He is a member of the Georgia Association of Historians and was a feature presenter on Renaissance swords at the 2006 Blade Show in Atlanta.

As a professional writer-researcher and practitioner of historical fencing, Clements has committed his life to advancing and promoting the study of Medieval and Renaissance martial arts. He presently teaches and researches on historical fencing full-time and is working on several book, video, and consulting projects.

To quote ARMA instructor John Clements: “As a historical fencer and Renaissance martial artist, I can think of nothing more satisfying than to simply declare, ‘Yes, I am a swordsman.’”