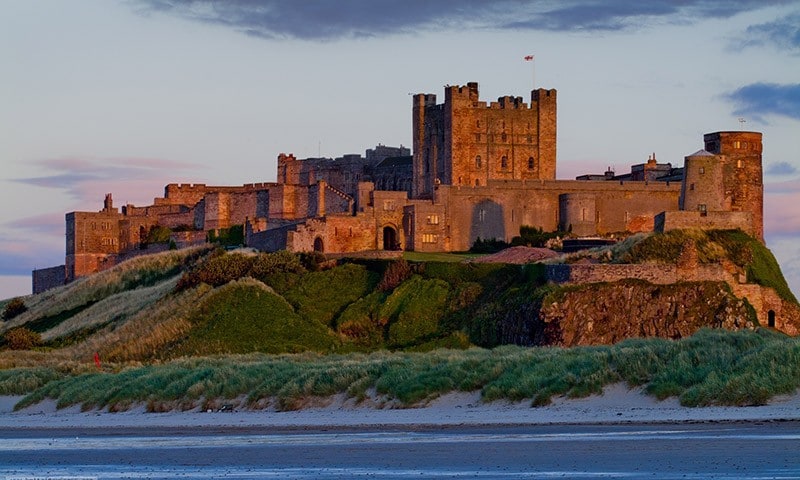 At a castle in England, archeologists are truly “reclaiming the blade”. Located on an outcrop of volcanic basalt overlooking the North sea, Bamburgh Castle offers a perfect natural location for a fortress. Occupied since prehistory, the castle rock, which today is dominated by a 12th century keep, has been a stronghold that has witnessed Romans, Anglo Saxons, Viking raiders, and Norman conquerors.

In the 1970′s Brian Hope-Taylor of Cambridge University uncovered many significant finds including a unique Anglian Sword. The sword was battle worn and exquisitely crafted, a six strand pattern welded blade that would almost certainly have been made for one of the Anglo Saxon kings who ruled from the site. This sword, and other important artifacts lay hidden for a quarter of a century, until they were rediscovered by Bamburgh Research Project, in 2001. The importance of the sword’s discovery was captured in HD by Bamburgh Production Coordinator, Gerard Twomey, and his team for inclusion in Reclaiming the Blade.

The Bamburgh 6-strand pattern welded sword is now thought to be the only one of its type in existence and is currently being researched by groups both at Bamburgh and the Royal Armouries. In order to truly discover the significance of this artifact, experts have been using diagramatical, 3D reconstruction, X-radiography, metallography, 2D drawing/painting, as well as researching 7th century metalworking and period tools.

The castle site was the capital of Northumbria in the Anglo Saxon period and dominated the rule of the North of England at that time. The Saxon Earls who ruled the north kingdom from Bamburgh also helped to establish Christianity. St. Aidan founded the famous monastery of Lindisfarne, Holy Island within sight of Bamburgh, and from here the famous medieval manuscripts, the Lindisfarne Gospels, were produced.

Through the hard work and diligence of Bamburgh Research Project, Galatia Films hopes to offer a visual reconstruction of this very unique sword, honoring a truly amazing discovery by an equally amazing man, Hope Taylor. With today’s computer technology we can envision the reality of this ancient work of art and historical weapon.

BAMBURGH RESEARCH PROJECT OFFERS IMAGES OF 1300 YEAR OLD SWORD
Back in the 1970′s archeologist Brian Hope-Taylor uncovered an Anglian Sword. Now known as the only one of it’s kind, it is currently being researched by groups both at Bamburgh and the Royal Armouries. In order to truly discover the significance of this sword, experts have been using diagramatical, 3D reconstruction, X-radiography, metallography, 2D drawing/painting, as well as researching 7th century metalworking and period tools. This fascinating find is going to be featured along with the continued work of the experts at the Bamburgh Project in Reclaiming the Blade.