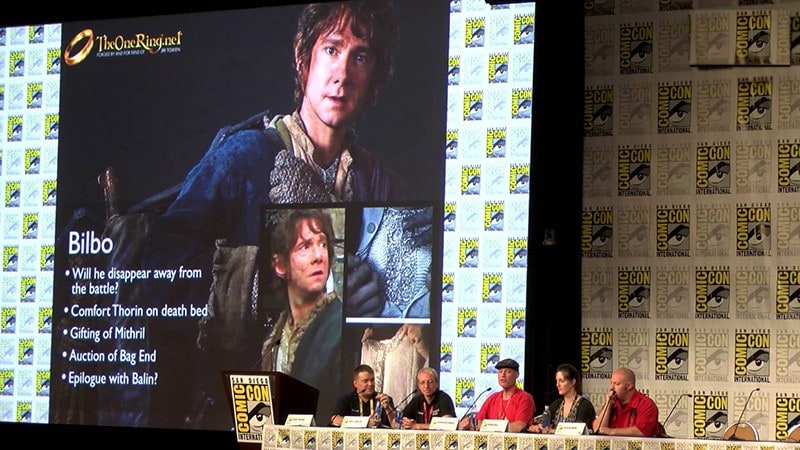 Galatia Films is pleased to announce the forging of a new friendship with TheOneRing.net, the most comprehensive Tolkien fan site on the Web. To kick things off at San Diego’s Comic-Con, TheOneRing.net will be conducting an exclusive interview with both Weta Workshop director Richard Taylor and award-winning artist and movie illustrator John Howe both of whom are featured in “Reclaiming the Blade”. The interview will be used to discuss their various film projects, including their association and involvement with Galatia Films.

This exclusive interview will take place at the Weta Workshop Booth (#2615) on Thursday, July 24 at 4 PM Pacific time. We’ll have a camera on site to capture the interview, and the video will be posted on both RTB TV and the TORn website.

Richard Taylor and John Howe will be autographing RTB mini-posters at the Weta Workshop booth immediately following the interview, and TORn volunteers will be distributing exclusive RTB flyers and information throughout the Comic-Con weekend. Galatia Films is honored to working together with John Howe and Richard Taylor, two of the most successful creatives in the film industry. Both have worked on some of the biggest sword movies in Hollywood, designing and creating some of the most beautiful weapons ever captured on film. A special thanks goes out to TORn for working with Galatia Films at one of the largest fan conventions in the world.

Comic-Con is an annual fan convention in San Diego held since 1970, that has grown steadily to become the premiere fan convention for movies, comics, and fantasy. Originally showcasing comic books, science fiction/fantasy and film/television (as was evident by the three circled figures appearing in Comic-Con’s original logo), and related popular arts, the convention has expanded over the years to include a larger range of pop culture elements, such as horror, anime, manga, animation, toys, collectible card games, video games, and webcomics. The convention is the largest of its kind in the world, filling to capacity the San Diego Convention Center with over 125,000 attendees in 2007.

TORn was founded in 1999 by a group of like-minded Tolkien fans so anxious for the coming Peter Jackson Lord of the Rings films that they were gathering up every scrap of production information to be found. TheOneRing.net continues today to bring fans the latest news on the beloved figures involved in the making of the popular Lord of the Rings movies as well as the newest information available on upcoming productions, Tolkien-centered events, new publications, and fan gatherings. Looking to the future with the support of its community of fans, TheOneRing.net continues to be the most comprehensive Tolkien fan site on the web.