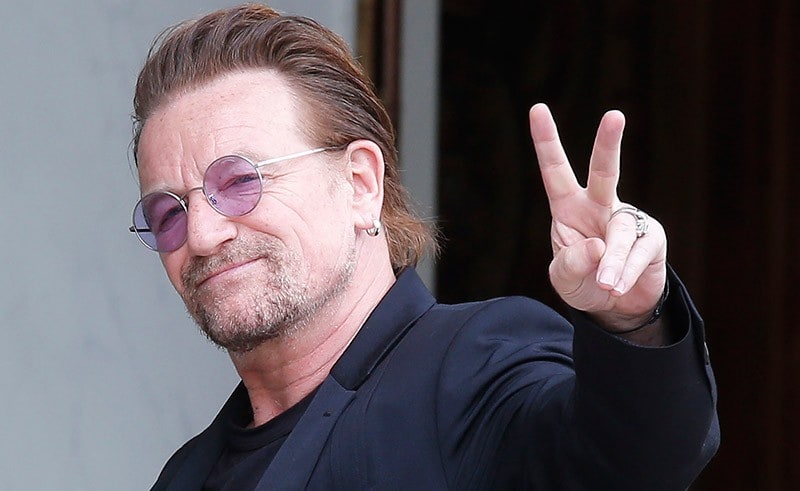 Two days after U2 opened their European summer tour, on August 6th at Olympic Stadium in Turin, Italy, the band’s singer, Bono, sat in his home near Nice, France – his back to the early-afternoon sun and Mediterranean sea breezes pouring through the open windows – and spoke excitedly and gratefully of his life over the previous few months: the moment he felt something go very wrong in his back, while in training for a North American tour; his emergency operation on May 21st in Munich for a herniated disk in his spine; the six weeks he spent in a hospital bed; and his entrance on stage in Turin, to the furious-guitar strains of “Return of the Sting Ray Guitar,” one of the many new songs U2 have been writing and recording in recent months.

“I have an annoying gene,” Bono admitted during our interview for the exclusive tour report in the current issue of Rolling Stone. “I am, as a character, at times, a little overbearing. I recognize that. I’m also a lot of fun. I’m a good time.” That is certainly true in his conversation. What follows are additional unpublished excerpts from that interview: on the show, U2’s new music and their future, as the singer sees it.

Opening Night
In Turin, I noticed an interesting restraint, a poise, in your stage movements. There was a natural element to the way you stalked the stage and punched the air. You weren’t trying to prove you were in shape. It was confidence, without overzealousness.

I woke up on the morning of the show with a certain anxiety: “Can I hit those notes? Have I got it inside of me? Have we got what it takes to make this experience one that people will remember for the rest of their lives? Or is it going to be four overrewarded musicians playing in a football stadium?” It’s an unusual place to make magic. And that’s our choice. We’re alchemists. We turn shit into gold. We turn it into a communion.

But you weren’t just getting out of bed. You were literally coming from a surgical table.
I was very nervous – very, very nervous. We had done a rehearsal two nights previous. And I was okay. I got through it. But I’m used to total immersion. I’m not used to the feeling I had. I didn’t like it.

Did that feeling go away when you walked out? When you started those Muhammed Ali-like moves, throwing punches in the air, it was the right statement: “I’m not gonna kill you, but I’m ready to take it on.”
Well, when I see Larry Mullen give me a standing ovation, I know something’s going on [laughs]. So it was a big night actually, just getting through it.

It’s interesting – the boxer. There was a little bit of that, the boxer going into the ring and talking himself into it. Which is a thing you never think about boxers. When they come with all of that fanfare, you think they’re trying to show you what they can do. They’re really talking to themselves – Ali, he’s telling himself what he needs to do.

Beyond “The Horizon”
What is your feeling now, a year later, about “No Line on the Horizon”? Are you disappointed that your fans have not taken to it the way they did “Achtung Baby” or “The Joshua Tree”?

Having listened to it the other day, I can understand that. It’s not very accessible, lyrically or musically. Its big song, which may be our biggest, “Moment of Surrender” – I remember that happening to us. It happened in there [points to the living room next door]. It was amazing. I don’t know why we needed a record that intense. I like music to be joyous. But you’re only in charge of a certain amount of what you’re doing.

So we put out a really difficult record. I would have to admit that. If I was a teenager, it would be like a European movie – it’s art-house.

But you originally created this tour around that record. At early shows, you were opening with as many as four songs from it. Was that overdoing it?

I think you could look back at the last couple of years as a gathering of intensity. And we’re demanding of our audience. But they are very demanding of us. They want to be challenged. They don’t expect U2 to be an easy ride.

In fact, one of the best bits the other night was “Get On Your Boots.” The song has finally connected. It took awhile. I always knew there was a great song in there. It’s punk rock now, where before it was Prince. There was a moment when Prince did rock & roll with a sponge-y seductive sound. I think that’s what was in our head for “Get On Your Boots.” But actually the song is much more punk rock.

The setlist in Turin was interesting in that two of the new songs you played, “Return of the Sting Ray Guitar” and “Glastonbury,” were total blinders: profane rock & roll kicks inbetween the spiritual-ambition parts of the show. Then there was “North Star,” an unfinished acoustic ballad.

Music is a sacrament for us. In that song [“North Star”], I thought, “It’s okay to write a love song for the universe.” “Glastonbury” was very funny that night– we did a version of that we knew we nailed, and then something happened at the end, I got lost a little bit [grins]. Edge had been hanging out with Jimmy Page [the two guitarists co-starred in the documentary “It Might Get Loud”], and you can’t help but have that rub off. So now it’s Willie Dixon, all those blues guys. Edge had this big riff. But I hear “Glastonbury” like the Chemincal Brothers, the Prodigy.

The song is about going to this music festival. [U2 were scheduled to headline at the British festival – Bono’s surgery forced them to cancel.] It’s a pilgrimage. It also turns out there’s a white flower that twice yearly blooms at Glastonbury. And the mythology of Glastonbury goes back to Joseph of Arimathea – he’s the guy who helped take the body of Jesus down from the cross. He is also said to have gone to Britain, to Glastonbury, where he put his staff in the ground. This big tree at Glastonbury, with this white flower, is supposed to come from that. [Bono recites part of the lyrics to U2’s song: “Came to find a flowering rose/The flowering rose of Glastonbury”.] And he’s supposed to have brought the cup from the Last Supper, the Holy Grail.

This stuff is so Seventies to me [laughs]. I can’t believe I’m in it. I’m going to Glastonbury for that. Everyone else is going for the music, being with your friends, hanging out. So we’re in this hospital room, I’m on morphine and it’s dawning on [manager] Paul McGuiness that we’re going to have to cancel all of those [North American] shows. But I went, “Can we do Glastonbury?” Dr. Müller-Whlfahrt goes, “These drugs are stronger than you think.” [Laughs]

The Next Album – or Albums
The tour is now less about the last album and more about your continuing history – the songs you played in Turin from deep in your catalog; the new material. That in-the-round spectacle has become more fluid, allowing you to do something more than amaze.

The idea was to make the crowd the spectacle – for us to be in the middle of this community and be able to play a new song if we want. People actually see it happening, because there is nothing else on stage. You can’t hide.

So now is the throwdown: “Oh, really? Let’s see you play some new songs. How about three?” Sure, people can say, “”Oh, I didn’t think that was any good.” But if I was a U2 fan, that’s what I would want. I would want to watch a new song develop. We may discover it’s not what we thought it was, and it may never see the light of day. But we’ve got a lot more songs to play.

How many?
We have Songs of Ascent, which is the meditative work that was meant to complement No Line on the Horizon. We’ve got a rock album. We also have a club-sounding album. And then we have the Spider-Man [musical] stuff.

Across those four, there are 25-30 songs. Now we have to decide how we go about releasing them? Do we release them in their groups? Chris Martin [of Coldplay] called me and said, “I hear you’ve got all these albums going. I have a great idea. Why not just pick the best songs from all of them and put them out now?” And I’m like, “Hmm . . . ” [Strokes his chin].

Because we don’t think like that. It’s a bit mad. In that sense, we’re not as 21st Century as we think we are, because we’d be putting out more new songs online, involving our audience in the choice – if we were really modern. We’re just sitting here arguing about them, except no one else knows about them. The people on the beach here probably know them, because we keep playing them, like we did last night [smiles].

How much do you see the show changing when you come back to North America next summer, to play the rescheduled shows?

That’s going to be great. We’ll maybe have a new album – I think we probably will. So it’s kind of wonderful. Those people are going to have tickets to a whole new show with new songs. It’s going to be very exciting next year.